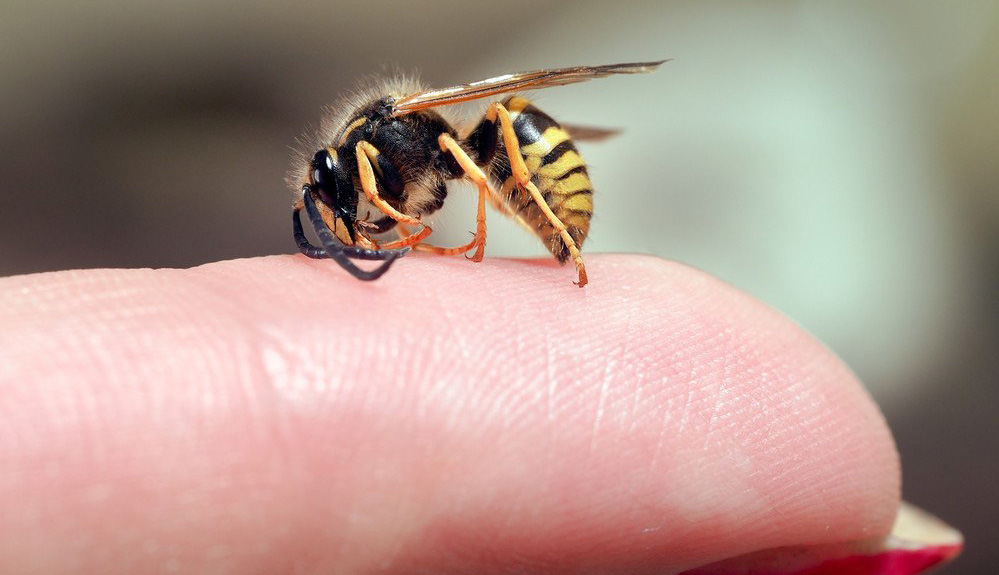 Wasp stings are very common across the UK. They usually aren’t dangerous and most people recover quickly, without any lasting impacts. However there are some instances where it can be a lot more serious.

Wasps are similar to bees. Both insects have a stinger used for self-defense. It is a misconception that wasps sting for the sake of it. In reality this is not true. Wasps will often sting when they have been disturbed or threatened.

Wasps have a sac full of venom on the end of their smooth stingers. Bees on the other hand have a barbed stinger. Concealed in the abdomen is the stinger deployed at a moments notice. The male wasps don’t actually have stingers but often pretend to, to warn off prey.
Types of Reactions to Wasp Stings

There are three different reactions that people have to wasp stings. The first is a normal local reaction which is the most common. The symptoms are usually a raised welt around the sting entrance. There may also be a white spot in the middle of the welt where the stinger has punctured the skin. Under those circumstances it is common for the swelling and pain to recede within a couple of hours.

The second most dangerous reaction is a large local reaction. Used to describe symptoms of a sting on someone. That is allergic to the venom but don’t have life threatening symptoms. More over symptoms include extreme redness and swelling around the puncture. As a result continuing for 2 to 3 days after the sting. Vomiting and nausea can also occur. These symptoms usually resolve themselves over the course of a week or so. If that is not the case it is recommended to seek medical advice. If you have a large local reaction.

Anaphylaxis is the most sever type of reaction to wasp venom . Generally speaking this occurs when the body goes into a state of shock in response to a sting. Most people who have this reaction go into shock straight away. It is very important to seek emergency care straight away.

Stung by a wasp? Firstly you should take yourself away from the wasp or wasps’ nest. Once you are away from the threat of receiving more stings. You are then able to deal with the sting at hand. You should thoroughly wash the afflicted area. Further more you should apply ice in 10-minute intervals. This should help with the swelling. If the pain continues it may be necessary to apply creams or take some medication for the pain.

If you are at all concerned by a wasp sting then you it would be advisable to seek medical attention as soon as possible.

This post was written in conjunction with Pest Removal Expert Ltd who provide Pest Control Bournemouth services for domestic and commercial premises in Dorset and Hampshire.